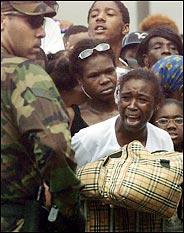 What we have witnessed the devolution of our humanity in the streets of New Orleans over the past 24 hours. Hunger, thirst, fear, anxiety and anger have melded to strip us of our natural dignity and plunge us into the subhuman realms of violence and chaos.

My fear is that the rest of America viewing these horrific events from their living rooms will demonize the people of New Orleans. My particular fear is that whites will see the preponderance of blacks among the angry and increasingly hostile crowds and begin to loose empathy. I fear many will begin to see the tragedy which struck New Orleans as a moral failure endemic only to black society - a moral failure the rest of us are immune to.

But even those of us disconnected from the immediate devastation of Katrina are experiencing some very understandable anxieties ourselves. Gas lines stretch for blocks in some places "just in case" something were to happen. I am willing to bet local army surplus and gun stores from Oxford, Mississippi all the way to Portland, Oregon have enjoyed a marked rise in sales since Tuesday. No doubt duck tape is a hot item. We rationalize these kinds of reactionary purchases and preparations as natural responses to the uncontrollable. But part of me has to wonder, when we go ahead and get a little more gas and a little more ducktape "just in case" is something dark in each of us peaking beyond the veil?

Our own inclinations toward self-preservation remind us that the gang violence and mob hysteria now plaguing much of New Orleans could very well happen in the Midwest or the Triangle area or anywhere else if the right pressures were exerted. None of us is immune to acting out of fear and desperation. And when isolated from a stable and well-functioning community, each of us could very well act out in violent and essentially sub-human ways.

Our call as people of faith is to remind the world that we are not sub-human. We are fearfully and wonderfully made - created in the image of God. As such our call is to recognize our deep inter-connectedness with one another. If a silver lining can found amidst the dark clouds it may be the fact that our rising gas prices and own sense of insecurity might get us thinking about the communal nature of our own createdness. Once the confusion and chaos end we will begin to reflect upon all that happened to fuel these terrible events. What will be most clear is the fact that those on the margins of society - the "least" among us - were the ones least prepared when catastrophe struck.

Perhaps many who would not otherwise have given pause to consider the plight of the poor will begin to think more broadly about how interconnected our economic, social and environmental choices are. And perhaps those of us not directly affected by the tragedy will recognize that our call as the people of faith is to side with the most vulnerable because our human destiny is intrinsically linked with those on the margins of society. When they fall, we fall too.

We were created in God's image. It is a communal image of three in one - Father, the Son and Holy Spirit. I pray that we might reclaim our own communal image, and see the beauty and deep inter-connectedness between us, our God and the rest of humanity and nature.
Posted by Ryon Price at 5:43 PM

Two fridays ago Irie and I took the three youngest members of our youth group to the Raleigh Catholic Worker House. The house is run by Sheila Stumph and her husband Scott Langley. They are living out their faith in very radical ways.

After living in a Catholic Worker house in Boston they decided they were being called by God to serve people on death row and their families. They loaded everything they owned in the back of Scott's pickup and headed to Raleigh - just beyond the walls of the North Carolina Central Prison. In the spirit of Christian hospitality Scott and Sheila have opened their homes to any families visiting prisoners and death row. They have also opened something of an unofficial after-school hangout place to the dozens of kids in the neighborhood.

I have to admit this was not your typical lockin. No spaghetti up the nose. Instead the girls heard the compelling story of a family seeking to live humbly and faithfully in the call of Christian discipleship and ministry. Sheila also gave us the privelege of taking part in that ministry by writing cards to some of the inmates on death row. All this while sitting around a table full of eight, nine and ten-year olds who have nothing better to do than come and help Sheila out with cards - in exchange for cookies of course. What else could be better anyway?
Posted by Ryon Price at 10:56 AM